Surah Mu’minoon: and those who guard their chastity 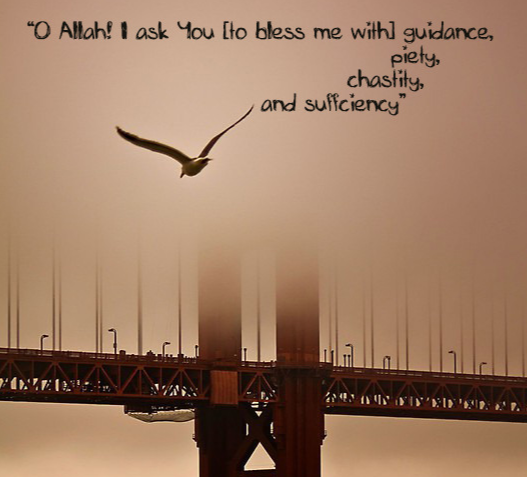 And the ones who guard their private parts- except with their spouses or their slaves –with these they are not to blame. However, those who seek (sexual pleasure) beyond that are the transgressors [Surah Mu’minoon Aayaat 5-7]

Imaam al-Nawawi (may Allaah have mercy on him) said: This indicates that permissible actions may become acts of worship, if there is a sincere intention. Intercourse may be an act of worship if the intention behind it is to fulfil the rights of one’s wife, to treat her kindly as enjoined by Allaah, to seek a righteous child, to keep oneself or one’s wife chaste, to prevent both partners from looking towards or thinking of haraam things, and other good intentions. (Sharh Muslim, 7/92)

There is major importance on controlling our tongues and our chastity emphasised throughout the Prophetic guidance. He(SAW) taught us the way to protect ourselves, our families and our communities from immorality and self-destruction. Our practise is restraint from unrestrained promiscuity that leads to the destruction of society. Family structure is the most important building block for a healthy, moral and vibrant society. Hence, the dangers of pornography, which is in the hands of everyone today – it leads to addiction, destroys our values, ruins relationships and supports human trafficking (modern day slavery).

In another narration, the Prophet said to him, “Then hate what Allah has hated, and love for your brother what you love for yourself.” [Musnad Aḥmad 21708]

Ibn Umar reported: The Prophet, peace and blessings be upon him, said, “Verily, modesty and faith come together. If one of the two is missing, so is the other.” [Shu’ab al-Imān 7211]

The one who engages in zinaa harms themselves, their wives, children, family and the ones they are involved with. This is why there are so many preventative measures in Islam – lowering our gaze, hijab, not being along with non-mahram people alone, marriage etc. Isn’t it interesting that the term faithfulness, with a focus on faith, is often intended to refer to ones marital relationship.

Usamah ibn Zayd reported: The Prophet, peace and blessings be upon him, said, “I have not left a trial after me more harmful to men than women.” [Ṣaḥīḥ al-Bukhārī 4808, Ṣaḥīḥ Muslim 2740] This is a struggle and a trial that all of us have to go through – controlling our thoughts and our desires. And the Prophet(SAW) said “Verily, the first trial of the children of Israel was with women.” [Ṣaḥīḥ Muslim 2742].

This does not mean that women are evil. Rather, the Prophet(SAW) explained that “This world is but provisions, and there is no provision in this world better than a righteous wife (woman).” [Sunan Ibn Majah] A whole surah has been dedicated to an-Nisaa and the excellent example of Maryam(AS). Also, the Prophet (Allah bless him and give him peace) said in a hadith narrated by Anas radhiyallahu anhu: “If a women performs her five prayers, fasts the month of Ramadan, protects herself from immorality, and is obedient to her husband, she will enter into Paradise from any door she desires.” (Hilya)

Sahl ibn Sa’d reported: The Messenger of Allah, peace and blessings be upon him, said, “Whoever guarantees for me what is between his jaws and his legs, I can guarantee for him Paradise.” [Ṣaḥīḥ al-Bukhārī 6109]

There follow some of the methods by which we can avoid this temptation. We ask Allaah to set the affairs of the Muslims straight.

1 – Faith in Allaah: If the believer becomes aware that Allaah is always watching and if he ponders the meanings of His names and attributes, such as the All-Knowing, the All-Hearing, the All-Seeing, the Watchful, the Reckoner, the Preserver, the All-Encompassing, that will generate fear of Him in secret and in public, and will put a stop to disobedience towards Allaah, and will reduce the strength of desire that leads many people to commit haraam actions.

2 – Lowering the gaze and avoiding looking at haraam things: The gaze can generate bad thoughts in the heart, which then lead to ideas and then to desires, then to will and resolve, and then inevitably to doing haraam things. Think about the meaning of this verse which makes a connection between the first steps towards haraam and the end result. Allaah says (interpretation of the meaning):

“Tell the believing men to lower their gaze (from looking at forbidden things), and protect their private parts (from illegal sexual acts). That is purer for them. Verily, Allaah is All-Aware of what they do” [al-Noor 24:30]

Imam Ibn Katheer (rh) said: “This is a command from Allaah to His believing slaves, to lower their gaze and avoid looking at that which is forbidden to them so that they only look at that which they are permitted to look at.  If it so happens that a person’s gaze accidentally falls upon something haraam, he should turn his gaze away from it quickly.

3 – Warding off evil thoughts: Bad thoughts pose a danger to the heart… If a person dwells on them and does not push them away, they will develop into an idea, then into will and resolve, then this will inevitably lead to haraam actions.  Beware of dwelling on passing thoughts; rather what you must do is to ward them off and crowd them out with good thoughts.

The treatment, then, is to ward off these passing thoughts and keep yourself busy with beneficial thoughts.  The Prophet(SAW) would make dua saying, “O Allah, I ask you for guidance, righteousness, chastity (‘afaafa), and independence.” [Ṣaḥīḥ Muslim 2721]

4 – Marriage: It was narrated that ‘Abd-Allaah ibn Mas’ood said: The Prophet (peace and blessings of Allaah be upon him) said: “O young men, whoever among you can afford it, let him get married, and whoever cannot, let him fast, for it will be a shield for him.” [Bukhaari, 5065]

5 – Fasting for those who cannot afford to get married “…and whoever cannot, let him fast, for it will be a shield for him.” [Bukhaari, 5065]

6 – Keeping away from bad companions: The Prophet (peace and blessings of Allaah be upon him) said: “A man will follow the way of his close friends, so let each one of you look at who he takes as a close friend.” [Abu Dawood, 8433]

7 – Keeping away from places of temptation: It is obvious that we are living in a society that is filled with temptation – media of all types, magazines, flirting in the marketplaces, satellite TV, the internet, etc… So you have to flee from all of these in order to keep your religious commitment sound.

8 – Do not make your houses graves: Make your house a reminder of obedience, not of sin. If a room is connected to sin for example, that will make a person commit sin repeatedly, because every time he enters that room he will remember the sin and may be provoked to commit the sin again. So he should make his room and his house a reminder of obedience to Allaah, so when he enters he sees the Mushaf which he reads, and he remembers praying qiyaam al-layl for Allaah, and the regular Sunnah prayers that he offers in this room. Doing a lot of acts of worship in your house will make a connection in your mind between the house and doing good deeds, so you will do more and will think less of sin, and the calls of desire will grow less.

9 – Trying to make the most of your time in worshipping and obeying Allaah: Time is one of the great blessings that Allaah has bestowed upon His slaves, but there are many who are not making the most of it. It was narrated that Ibn ‘Abbaas (may Allaah be pleased with him) said: The Prophet (peace and blessings of Allaah be upon him) said: “Two blessings which many people do not make the most of: good health and spare time.” Narrated by al-Bukhaari, 6412.

10 – Remembering the blessings of the Hereafter: Particularly appropriate in this context is remembering al-hoor al-‘ayn and their attributes, whom Allaah has prepared for those who are patient and steadfast in avoiding sin. This can help the Muslim to look at these transient haraam pleasures which only lead to regret and loss.

“Wherein both will be Qaasiraat‑ut‑Tarf [chaste females (wives) restraining their glances, desiring none except their husbands]” [al-Rahmaan 55:56]

Anas ibn Malik reported: The Messenger of Allah, peace and blessings be upon him, said, “Were a woman among the women of Paradise to gaze upon the earth, she would light up the space between them and fill it with the scent of perfume. Her veil is better than the world and everything in it.” [Ṣaḥīḥ al-Bukhārī 6199]

We ask Allaah to help us to avoid temptation, both obvious and hidden.