One of the common characteristics of Insaan is that very few people have the ability to benefit from a blessing while they actually have it. Many of us spend our time in regret after the blessing has gone, but while we have the opportunity, very few of us value it. As Ramadan races by, this is ever more apparent.

This is true with many things such as the presence of our mother or father – while our parent is there, we have little or no regard for them. Every day they are there, we think they will always be there – our mother will be there to make dua for us and our father will be there to take care of us. But the day we are informed that they are no more, it feels like the world has just folded in on us. From that point, regardless what we do – cry or lash out or deny it, that person will never return. Because once they have left the dunya, they move forward with their journey.

Similarly, the blessing of these moments of Ramadan and a life to live them while healthy and able is a signficant opportunity we need to value before we lose it.

A physician in the Muslim world, reported that of all the deaths he had witnessed in the hospital approximately 70% of them did not pass away saying the shahada. Despite being in a Muslim country, in a Muslim-run hospital, surrounded by people passing away, hearing the adhan every day, they passed away remembering a song that was playing in their minds, cursing a family member or recounting a debt that was owed to them. Why? Because they did not live a life of concern about this moment.

O you who have believed, what is [the matter] with you that, when you are told to go forth in the cause of Allah , you adhere heavily to the earth? Are you satisfied with the life of this world rather than the Hereafter? But what is the enjoyment of worldly life compared to the Hereafter except a [very] little. [Surat At-Tawbah 9:38]

All people go to Allah(SWT) after death but its only a wise person who goes to Allah(SWT) before his death. Don’t fear death, fear the state in which you will die.

Ramadan is a time for us to return to Allah(SWT) – to make a promise to be His slave and not the slave of our nafs, of other people (popular culture) or of Shaytaan. This is the time to submit and commit to Allah(SWT), not out of duress but out of desire – desire to achieve His Pleasure.

A dear friend recently lost his youngest brother in his sleep – with no medical history or forewarning, it came as a massive shock for the whole family and the community who would see him regularly at their local post office. Standing at the grave with my friend and many supporters, I watched as this brother spoke last to thank all those who had attended and he said some words which no-one else had mentioned to that point. He said that “this grave is the reality for all of us. My brother had a sharp tongue and if you were ever on the receiving end, I request that you forgive him.” A true and humble request of his shortcoming from a person who knew that he should not face his Lord except that he is released from anything negative left in this dunya.  Shortly afterwards, I spoke to a very close friend and colleague of his who had worked with him in the security industry for more than 10 years. He cried and told me of how he had spent countless nights and Ramadan with the deceased brother where they would both alternate on the watch and reading taraweeh, Quran and remembering Allah(SWT). These words remain with me as this brothers legacy, captured in a succinct eulogy which recognised his shortcomings and his virtues.

Signs of a bad ending and how to prevent it

We are all good to lamenting our state and regretting that Ramadan has slipped through our fingers, but few are those who make something of it now.

There is a beautiful dua which states 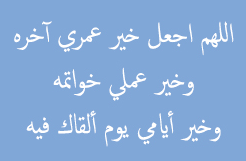 Hasan Basri (rh) says: ‘The heart becomes corrupt through six means: committing a sin in the hope of repenting; seeking knowledge and not applying it; practice without sincerity; eating the sustenance of Allah without appreciating Him; not being pleased with Allah’s allocation (destiny) and burying the dead but not learning from them.