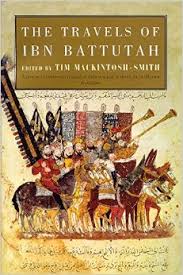 attutah’s full name is Abu Abdullah Muhammad ibn Abdullah ibn Muhammad ibn Ibrahim al-Luwati al-Tanji. He was born in the year 1304 in Tangier in current day Morocco, into a distinguished and wealthy family of Islamic scholars and judges. His ancestry was originally from Egypt, but later became part of a Berber tribe. He was educated in the Islamic sciences and keeping to his family’s involvement in the judiciary, he prepared to become a jurist/lawyer. However, at the age of 21 (in 1325), he decided to go for Hajj, which would be the first of many throughout his life. Little did he know that this first journey would change the course of his life; that he would leave an indelible mark on the history of Muslim civilization.

While travelling in a pilgrim caravan to Makkah, in Alexandria, Ibn Battutah met a sufi by the name Sheikh Burhanuddin, who it is reported prophesised that he would one day travel the world. The sufi even asked Ibn Battutah to pass on his greetings to his spiritual brothers in Sind, India and China. This inspired Ibn Battutah, who from that first voyage of Hajj at the age of 21, returned back to Morrocco, to the city of Fez, some 29 years later (in 1354) at the age of 50. When he returned, he dictated his Rihla (“Accounts of Travel”) from memory to Muhammad Ibn Juzayy – the secretary of the ruler of Fez at the time, Abu Inan Faris (1329-1358). This account was published under the title, “A Gift to Observers, Dealing with the Curiosities of Cities and the World of Travels,” which was first published in English under the title “The Travels of Ibn Battutah” in 1929. Ibn Battutah spent the next 24 years in Fez, serving as judge, and died at the age of 74.
There are many fascinating descriptions from his Rihla that provide a detailed picture of 14th century societies, customs, lifestyles, ships, wildlife, anecdotes, and regions etc. Ibn Battutah visited. Below are just a few interesting points and facts.

• Most of Ibn Battutah’s story was dictated from memory when he returned to Morocco because his travel notes were lost to pirates. This has led later historians to question the authenticity of his accounts. While in most cases Ibn Battutah’s accounts have been corroborated, there are proven examples where he embellished the story using hearsay evidence or accounts by earlier travellers. This is an area of ongoing academic investigation.

• Ibn Battutah travelled across India for almost a decade providing detailed descriptions. He took a month-long detour from Chittagong to travel to today’s Sylhet region to meet the sufi Shah Jalal (1271-1346) and recounted the miracle that he was divinely inspired to send four of his companions to greet Ibn Battutah with two days of travel left from Shah Jalal’s place despite having no knowledge of his intention to meet Shah Jalal.

• Ibn Battutah often secluded himself from public for days or weeks at a time to engage in worship (nawafil salah, tilawah, dhikr etc.), and is generally considered to have been an upright person. Being an educated person and his experience of different peoples and cultures meant that he often found himself dining with rulers and notable men, or being appointed as judge (qadi) or asked to mediate between people.

• Many of the regions he visited had very diverse local customs, particularly among people who had recently converted to Islam, which Ibn Battutah would often describe as un-Islamic.

• His travels can be generally categorised into 3 periods. In the first period between 1325-1332, Ibn Battutah travelled across North Africa, Egypt, Arabia, Iraq, Syria, Persia, Somalia, and the Swahili-speaking East coast of Africa. The second period covers 1332-1347, in which he travelled across Anatolia (current day Turkey and surrounding areas), Central Asia, Southeast Asia (Myanmar, Malaysia, Philippines, Indonesia etc.), India and China. His third period, from 1349 to 1354, covers such regions like Spain, North Africa, Mali and Timbuktu.

• Historians have said that if you add all of his travels it comes to 75,000 miles, covering 40 countries in the modern map, all of which he set out travelling on his own. For these reasons, Ibn Battutah is no doubt the greatest Muslim globetrotter.

• Ibn Battutah’s description start off with these words: “My departure from Tangier, my birthplace took place on Thursday the second of the month of God, Rajab the Unique, in the year seven hundred and twenty-five, with the object of making the Pilgrimage to the Holy House at Mecca and of visiting the tomb of the Prophet, God’s richest blessing and peace be on him, at al-Madinah. I set out alone, having neither fellow-traveller in whose companionship I might find cheer, nor caravan whose part I might join, but swayed by an overmastering impulse within me and a desire long-cherished in my bosom to visit these illustrious sanctuaries. So I braced my resolution to quit my dear ones, female and male, and forsook my home as birds forsake their nests. My parents being yet in the bonds of life, it weighed sorely upon me to part from them, and both they and I were afflicted with sorrow at this separation.”

Muhammad Mojlum Khan, The Muslim 100: The Life, Thought and Achievement of the Most Influential Muslims in History, 2008, Kube Publishing, p184-187.