Commitment – the foundation of great accomplishments 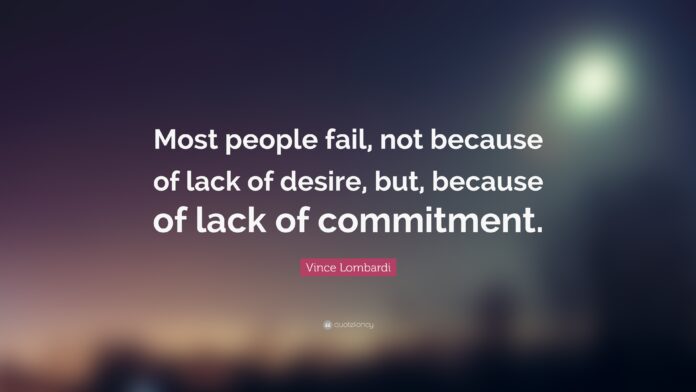 Last week, I was speaking to a dear friend and we were talking about personal, professional and community goals. I suggested that we should all have a lofty and important goal and recommended the memorisation of the Qur’an, with support from the masjid and a gradual programme to ease into it – surely if we aim at the moon, we will still land among the stars. However, just the mention of this goal caused a visceral reaction, on the basis that I don’t want to commit to something and let anyone down. This led to a very interesting discussion on the fear of commitment.

Why is it that when we face a significant, noble goal we back off? Whether its Hajj, praying in the masjid, attending an Islamic class or committing to a health programme, the common response tends to be “I’m not sure if I can commit”.

Most of us settle for mediocrity in most things – why put in too much effort? Perhaps we stumbled into our first job because we threw up our hands, shrug our shoulders & think there’s nothing else we could possibly do. When we come up for air, & pause to reflect 30 years later, we are not quite able to remember why we started in the first place.

We look enviously at a friend or colleague who got out of the rat race. We may even spend time looking into alternative career paths.

But we don’t commit. We never commit. This is a problem, as without commitment, we never really pursue those big, ambitious goals we should pursue in life. It leaves us paralysed, never taking action.

This is quite common in society today, especially as the concept of freedom is so sacrosanct – why would you want to tie yourself in commitment to another person or goal?

What are you really afraid of committing to?

And there are some genuine fears wrapped into the idea of commitment:

Therefore we shy away from commitment. We prefer to sit in life’s waiting room, thinking we have all the time in the world. We ignore the reality that we have but a brief moment to make an impact on it through dedicating ourselves to one goal.

What about everything else you have committed to?

Isn’t it interesting to note that we are committed to so many things without even thinking about them:

So why not commit to something which will bring you immense benefit in this life and the Hereafter?

The importance of committing to a worthy goal

A commitment is a pledge that obligates you to assume a position or carry out a specific course of action.  Some would say that making a commitment to do or support something, whether in your personal life or your professional life, is one of the most fundamental activities of success.

Making a real commitment means that you try harder, you look for innovative solutions when faced with obstacles, you don’t consider quitting as an option, you are persistent and extremely resilient. In addition, a meaningful commitment gives you a possible script for how to handle things when times get tough. Commitments separate the Doers from the Dreamers!

No doubt, everyone feels like quitting at one time or another. However, one of the most distinguishing characteristics of successful leaders is their persistence of commitment. Whether it’s a commitment to a relationship, marriage, job, career venture, fitness, wellness, or a personal improvement goal, the temptation to give up will always arise, however, the key is to anticipate it and make yourself a promise that the feeling of wanting to quit will not overpower your commitment.

What is our biggest commitment?

The single, most important commitment which unifies each and every one of is as Muslims is to Allah(SWT). We have willingly read our shahada – the contract of our belief. And we reiterate this every unit of our prayer, 17 times a day when we say “You alone we worship and You alone we seek help from.”

Our thinking is that if we don’t commit, we cant let anyone down. But, the reality is that we let ourselves down by not committing to that which is important for our growth – our health goals, our personal development, being our best in life.

A tale of two sons

A local paramedic shares a contrasting experience this week. His first call out of the evening was a 13 year old boy who had been asked by his father to clean his room before he could enjoy his Playstation. The child started ripping out lights and damaging the room, swearing and even tried to stab a family member.

Later on the shift, the paramedic visited the house of an elderly couple which seemed it like it was still frozen in the 1930’s. The wife had extreme dementia and when questioned thought she was living with her brother, not her husband of 60 years. They had four carers but would not eat from any of them, waiting for their son to visit them daily. Their son, someone who you would pass by on the street and not even notice, would arrive at 9am every day, prepare breakfast for both of them and personally feed them.

This tale of two sons, shows the power of commitment. The first young person was committed to his entertainment to such a degree he would harm himself and others for it. The second was committed to his parents and would dote over them as they had over him in his younger years.

The best examples of commitment

The companions of the Prophet(SAW) really put high value on committing to Islam. Basheer ibn Al-Khasasiyyah reports: “I went to the Prophet to give him my pledge, and I asked him: ‘What shall I commit to you, Messenger of God?’ He said: ‘You declare that you believe that there is no deity other than God and that Muhammad is God’s servant and messenger; attend regularly to your five daily prayers, pay your zakah (i.e. obligatory charity), fast in Ramadan, perform the pilgrimage and strive for God’s cause (i.e. jihad).’

I said: ‘Messenger of God! I will fulfill all these except two which I find too hard: Zakah, for I only have ten she-camels which provide milk for my family and are used for our travel; and jihad. I am a coward and people say that anyone who runs away from battle will incur God’s displeasure. I fear that should there be a battle, my life will be too dear to me and I might run away and incur God’s displeasure.’ closing his hand and taking it away.

The Prophet said: ‘Basheer! Neither zakah nor jihad! How will you, then, gain admittance into heaven?’ I said: ‘Messenger of God! Put out your hand so that I can give you my pledge. He did so and I pledged myself to all that he mentioned.’” (Related by Ahmad, Al-Hakim, Al-Bayhaqi and others).

On another instance, the Prophet (SAW) said: ‘I accept your pledge to worship God alone, associating no partners with Him, attend regularly to your prayer, pay zakah, give good counsel to every Muslim and dissociate yourself from idolatry in all forms.’” (Related by Al-Bukhari, Muslim, Ahmad and Al-Nassaie).

Commit your life to Allah(SWT) in remembrance, focus, spending and striving.

Hind bint Utbah ( رضي الله عنها – may Allah be pleased with her) was a fierce woman. Whatever she did – either good or bad – she did it with all the energy she had. She was a woman of powerful mindset. She was the wife of Abu Sufyan, a powerful man of Makkah and the mother of Muawiyah(RA), the founder of the Umayyad dynasty.

Her anger for Muslims was so intense that she accompanied the army to the Battle of Uhud to see Wahshi killing Muhammad’s uncle Hamza. When the battle came to an end, Hind and the women went to mutilate the corpses of the dead Muslims. They cut off noses and ears and made them into necklaces and anklets. After Wahshi speared Hamza, Hind gouged out Hamza’s liver and bit into it; but she was unable to swallow the bite and spat it out. Then she climbed a rock and shrieked at the top of her voice: “We have paid you back for Badr…”

Eventually her heart softened towards Islam. But her remorse kept her doubting whether she could even face Muhammad ﷺ. So one day she veiled her face so that the Prophet ﷺ would not recognize her and took her shahaadah.

Later on, In the Battle of Yarmouk, the Muslims defeated the Eastern Roman Empire with the help of such courageous women who fought when men ran away.

As arrows started raining down on Abu Sufyan, he tried to turn his horse away. Hind struck his horse in the face with a tent-peg and said: “Where do you think you’re going, O Sakhr? Go back to battle and put effort into it until you compensate for having incited people in the past against Muhammad ﷺ.”

The lesson for each of us, is that regardless of our mistakes (no matter how big), those shortcomings don’t define us. Instead of wallowing in regrets, clarify your vision, set a worthy goal and use your energy to convert the guilt into progression and reward for the sake of Allah(SWT).

Bilal (RA) was amongst the first Muslims – the first slave to enter Islam and we all know his struggles in those early, difficult days. In the miraculous journey of Isra wa Mi’raj, the Prophet(SAW) was surprised to hear the footsteps Bilal before him. At the time of the Fajr prayer the Prophet (ﷺ) asked Bilal, “Tell me of the best deed you did after embracing Islam, for I heard your footsteps in front of me in Paradise.”

What goal are you going to commit to today? Every Friday at 7pm, we have a class in Madinah Masjid to read through a juz of the Qur’an sharing an ayah each. We have free memorisation classes in this masjid Saturday, Sunday and Monday. Are you going to commit to attending the masjid at least once daily? Or sharing something you’re grateful for from Allah(SWT) every day with someone you know.

The situation regarding Islamophobia following the global lockdown

The situation regarding Islamophobia following the global lockdown