The best of stories – Surah Yusuf (AS) Part 1 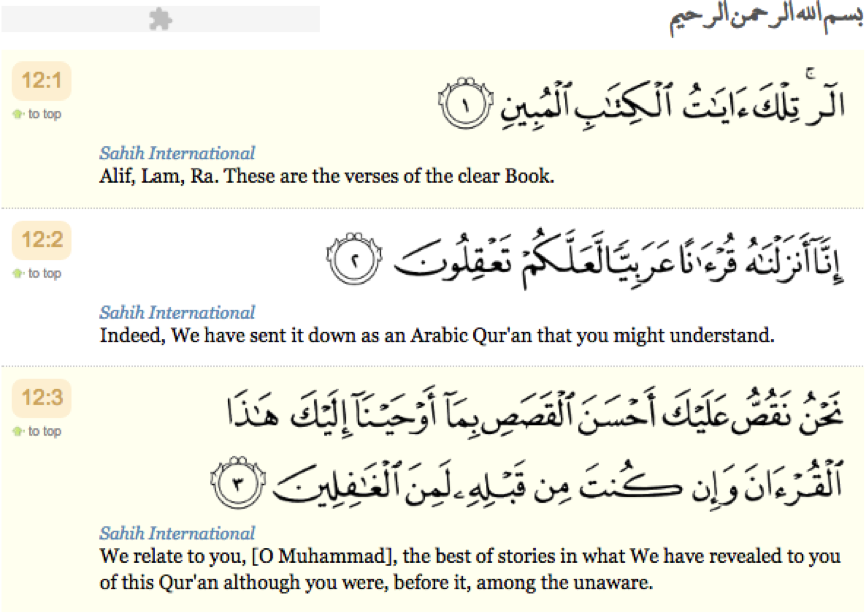 This is a very special story talking about a very special person. An inspiring and amazing story of loss and gain. A lover who has to balance his love of this Dunya – wealth, affection, attraction, power, – for His Lord. In fact, the whole of this part of the Qur’an only talks about this person and his story isn’t mentioned anywhere else in the Qur’an.

Their media poetry was attacking constantly. They tortured him and his companions. They offered bribes of money, of royalty and power. And then the boycott began, 7 years after the first revelation – don’t sell them anything, speak to them or marry with them and then exile them and let them starve – in siege in the mountains for fear of attack. The sheer strength and perseverance of the Muslims won through – they did not rebel or leave, rather they maintained a discreet detachment and clung firm to their belief. Three long years, this boycott remained until the youth of Makkah gathered and annulled this. There were only 65 muslims after 10 years + social and economic boycott.

Then this is trial is followed by tragedy – his beloved wife Khadeeja (Ra) passes away. Khadeeja (Ra) was the very first Believer and the first woman in the whole world to declare that God was One, and Muhammad was His Messenger to all mankind.

During the siege, she had to endure not only the pangs of hunger and thirst but also the extremes of heat in summer and cold in winter, and yet no one ever heard a word of gripe from her, and she never lost her serenity, rather she was always cheerful.

She spent her immense fortune on buying essentials like water, food and clothing for the clan of her husband. When she returned to her house, her last cent was gone; and when she died, there was not enough money in the house to buy a shroud. A cloak of her husband was used as a shroud for her, and she was given burial in it. She sacrificed her comfort, her wealth, and her home for Islam; and even her life, dying on the 10th of Ramadan.

Only one month later, his uncle Abu Talib who had looked after him since he became a Prophet, his efficient protector. It is said that throughout the 3 years of boycott, he wouldn’t sleep at night to guard over (SAW). Now he passed away and now he wasn’t safe from the attacks of the Quraysh tribe – he was an outlaw, obliged to conceal himself.

Looking for a safe place for the Muslims, the Prophet Muhammad (SAW) went to the Taif community, leaving at night to ask them for help with his helper and companion, Zaid bin Haritha(RA). Together they spent 10 days searching out the leaders of Taif and presenting Islam to them individually. Yet, all 3 of them rejected – Ibn Ishaq reports their comments like “Could Allah not have found someone else to send as a prophet instead of you?” and “By Allah, “I do not want to talk to you, for if you are in fact a Prophet, then to oppose you is to invite trouble, and if you only pretend to be one, why should I talk with an impostor?” As he was leaving Taif he (SAW) asked them not to expose this rejection but, from fear that he may gain credence, they provoked their hooligans and street youth to insult and attack him. He was so much pelted at with stones that his whole body was covered with blood, and his shoes were clogged to his feet. Muhammad ﷺ left the town in this woeful plight. Escaping their attack, they rested in a garden owned by Utba and Shayba bin Rabia who were our Beloved Prophet’s (PBUH) distant relatives. In exhaustion and after slightly recovering from the trauma of this shameful incident, he made this sorrowful appeal:

“O, my Allah! To Thee I complain of the feebleness of my strength, of my lack of resources and my being unimportant in the eyes of people, O, Most Merciful of all those capable of showing mercy! Thou art the Lord of the weak, and Thou art my own Lord. To whom art Thou to entrust me; to an unsympathetic foe who would sullenly frown at me, or to an alien to whom Thou hast given control over my affairs? Not in the least do I care for anything except that I may have Thy protection for myself. I seek shelter in Your Light-the light which illuminates the Heavens and dispels all sorts of darkness, and which controls all affairs in this world as well as in the Hereafter. May it never be that I should incur Thy wrath, or that Thou should be displeased with me. I must remove the cause of Thy displeasure till Thou art pleased. There is no strength nor power but through Thee.”

Now, it was very dangerous for the Prophet and all his followers in Makkah and the Quraysh were trying to finish Islam off once and for all. This was a very sad time for all Muslims. He too had lost his family (like Yusufs brothers), his wealth (social boycott), his status & reputation.

As well as hurting the Muslims, the Quraysh wanted to show that Islam was not the true religion. They went to the Jewish tribes in far away Madinah and asked them for some tricky questions so that they could try to prove that Islam should not be followed. The hardest question that the Jews could think of was “Ask him about the story of Yusuf and his brothers? Nobody know this.” And in another narration “How did Bani Israeel end up in Egypt”. Remember, in Makkah there were no libraries of Christian or Jewish books and the few people of religion would hide their faith. Also, Yusuf (AS) came 2,460 years before the coming of the Prophet (SAW). Some say Quraysh are the saa’ileen.

When the Quraysh came and asked this to Prophet Muhammad (SAW), Allah(SWT) immediately sent to him the whole of this Surah in one go from the beginning to the end (anzala) and proved that he (SAW) was indeed on the truth and he was guided directly by Allah(SWT).

Most of the huroof ul muqatta’aat are followed by mention of the Qur’an which is the remaining miracle and a challenge to all the Arabs. It reminds them that you may not know the meaning of everything but know that Allah(SWT) is in control and aware of all of it. 6 consecutive surahs begin with these letters, from Surah Yunus > Al-Hijr with Ar-Ra’d also have meem between.

So lets begin this true story. The king of words is the word of the King of Kings. He created everything and therefore knowingly tells us this is the best story.

to you. Before this you were one of those who knew nothing about them. 4. Joseph said to his father, ‘Father, I dreamed of eleven stars and the sun and the moon: I saw them all bow down before me,’ 5. And he replied, ‘My son, tell your brothers nothing of this dream, or they may plot to harm you––Satan is man’s sworn enemy. 6. This is about how your Lord will choose you, teach you to interpret dreams, and perfect His blessing on you and the House of Jacob, just as He perfected it earlier on your forefathers Abraham and Isaac: your Lord is all knowing and wise.’

This is a story about a young boy called Yusuf who lived with his father, brothers and step-mother. He was 7 years old.

Yusuf’s mother had passed away when she gave birth to his baby brother Binyamin. Although the name Yusuf isn’t an Arabic name, the word is closely related to the Arabic word Asaf, meaning sadness.

He also had 10 older step-brothers.

Yusuf and his family lived in an area in Palestine called Hebron.

His family were wealthy and strong.

They had a lot of land which they owned in Hebron and close by.

His father loved all of his children and treated them all fairly. He was a very good man and a Prophet by the name of Yaqub – may Allah bless him. He was also knows as Isra’eel.

Yusuf was very handsome. The Prophet Muhammad (SAW) taught us that “Yusuf was definitely given half of all beauty.” (Muslim, Ahmad) Some of the scholars say this is of all the people of his generation or half of the beauty of Adam(AS).

Look at the love between father and son – respectful terms. Sharing their personal stories and experiences. How many of us have this relationship with our father or child?

Saw two things – Repetition because he’s amazed by this vision. First them. Then prostrating and he knows the meaning hence the use of –hum, not –haa for inanimate objects.

A very interesting hadith: The Prophet (SAW) said, “Dreams from Allah are the only thing that remain from prophethood, and they represent 1/46th of prophethood.” Why so precise? He (SAW) is saying that to be a prophet, you need 46 things, and one of them is true dreams. There are 46 things that all prophets do, and 45 have been shut for everybody until the Day of Judgment except for one door, and that is the door of good dreams. 6 months before Prophet he saw true dreams = 0.5 years / 23 years prophethood = 1 / 46.

Dreams are of different types:

In one hadith, the Prophet (sal Allahu alayhi wa sallam) said, “I saw men wearing robes of different sizes, and some of the robes were up to their necks and some were up to their stomachs.  I saw Umar ibn Al-Khattab and his shirt was dragging behind him.”  They said, “How did you interpret this?”  He (sal Allahu alayhi wa sallam) said, “The religion.”   People have different sizes of religion.  The religion of some is small and the religion of some is big.  Umar’s religion was so strong, it was going all the way back there.  A shirt means religion in this dream (not in all dreams). Dream interpretration is not a book science, rather its Allahs gift.

Scholars differ if father was sun or mother, although, from whoever emanates the most noor (light), they would be the sun and the moon reflects that good noor. 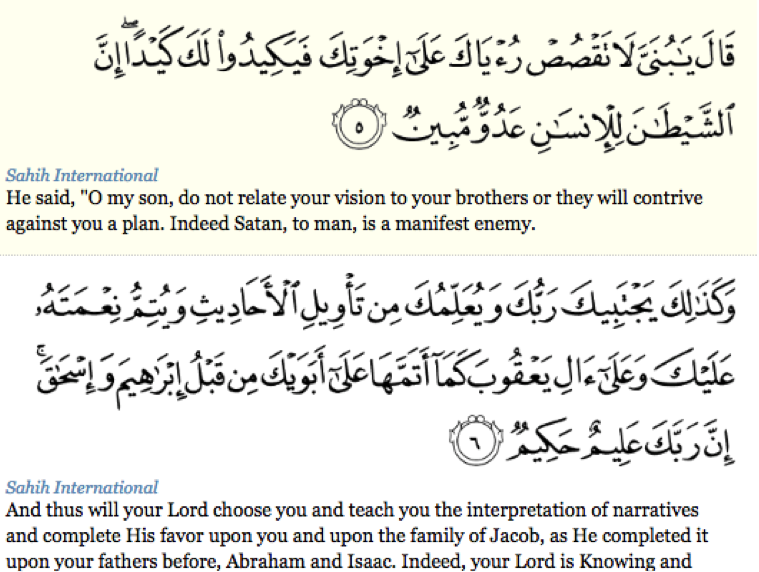 Qur’an muhaasibee – act on it (last sahabi v old who just completed Qur’an by fil waiting to knock on door of some one who wasn’t home.) Fear and hope , lessons from stories and faith in allegorical verses.

Why is it so bad that it can wipe out our Islam? Allah has made everyone different – tall and short, light and dark, different intelligence and ability, different backgrounds. We didn’t have a choice about these and if we look at someone and wish they didn’t have that, its like we are saying Allah got it wrong and we know better. No, Allah chooses different qualities for every person and you are all special in a slightly different way.

3 ways to repel envy – make dua for them, talk good about them and give them gifts.

They will plot against you a very severe plot (balaagha lost in translation). Lessons:

Prophet Yaqub recognises that one day Yusuf (AS) will become better than all of them, and he is humble. He knows that this is a major sign and is very pleased but also afraid that if he shares this dream with his brothers, they will be very jealous. He knows them and he advises him to be strategic – take precautions.

Then he says something amazing – Allah, the One who looks after you and I and gives us health and life – He Knows everything and He always makes the best decisions – He is very Wise. How could he save a nation without this? Saving millions of people without going through exile, imprisonment, slavery, internment? What a plan.